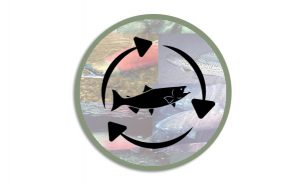 Adult male and female salmon release gametes (eggs and sperm) simultaneously as their bodies shimmy and their mouths gape. Their fertilized eggs are deposited in a redd (a nest dug in the gravel) located in a streambed or along a lakeshore. The female salmon digs the redd using undulating (sweeping) movements of her tail, while the male chases away other males attempting to spawn with the female. The embryos (fertilized eggs) hatch and develop into alevins (yolk-sac fry) which live off their nutrient rich yolk-sac that is attached to their underside. The young alevins will emerge as fry from the redd when they absorb their nutrient rich yolk-sac and start actively searching for food. Alevins that emerge from the redd before they completely absorb their yolk-sac are commonly called button-up fry. The small vulnerable fry will start to develop parr marks (vertical bars) on their sides as they feed and grow. The parr marks last from a few months to several years, depending on the species and variety of salmon. After a period of growth in fresh water, anadromous fish will start their downstream migration to the ocean. (Kokanee and other land-locked salmon migrate downstream to a lake.) The silvery smolts will undergo a series of physiological and morphological changes that allow them to acclimate (adjust) to the salt water conditions of their new marine environment. Once in the ocean, the smolts will feed and grow into fully developed adult salmon. Some salmon, called jacks/jennies become sexually mature after only a short time in the ocean, and return to their natal stream to spawn (reproduce) earlier than the rest of their brothers and sisters. (Jacks are males. Jennies are females and are very rare. On the East Coast and parts of California, the term “grilse” is used rather than “jack.”) Salmon that have spawned are called kelts. Pacific salmon (chinook, coho, pink, sockeye/kokanee, and chum) spawn only once during their lifetime (they are “semelparous”), and they die within a week or two after spawning. The nutrients from their decomposing bodies help to fertilize the stream where their young will live the early stages of their lives. Steelhead (anadromous rainbow trout), coastal cutthroat trout, Atlantic salmon, brown trout, brook trout, Dolly Varden, bull trout, and other salmonids can be anadromous, but can still spawn more than once (they are “iteroparous”). After spawning, they return to the ocean to feed and grow more, and will make their way back to fresh water to spawn again in another one to three years. 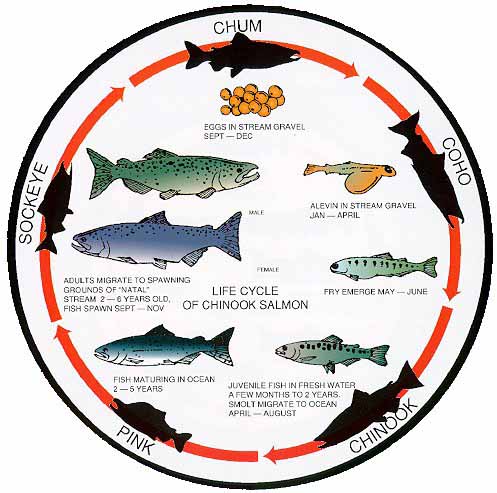 Below are pictures related to the terms in bold text in the paragraph above.
Adult male and female salmon 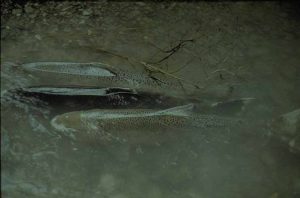 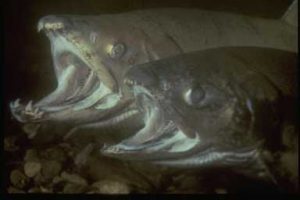 Salmon gaping while spawning. Photo courtesy of Salmon. 1984. Atsushi Sakurai and John N. Cole. Published by Alfred A. Knopf, New York. First edition. Photograph copyright 1981 by Atsushi Sakurai. (This photograph is copyrighted. To use this photograph you must obtain permission from the publisher.)
Redd 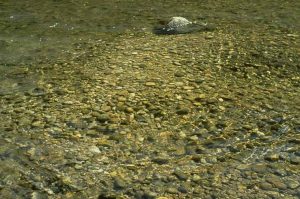 Salmon redd in a stream. Image obtained from the BPA photo archive.
Streambed 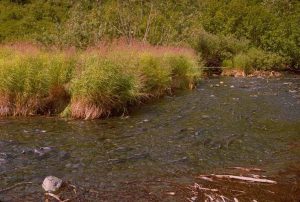 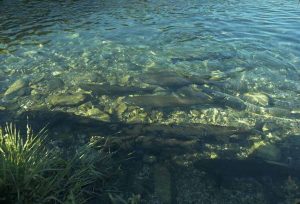 Examples of streambeds where salmon and steelhead spawn. Images obtained from the BPA photo archive.
Digs the redd 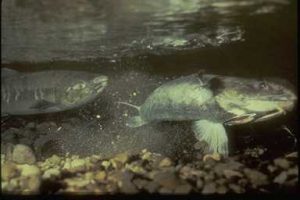 Chum salmon digging a redd. Photo courtesy of Salmon. 1984. Atsushi Sakurai and John N. Cole. Published by Alfred A. Knopf, New York. First edition. Photograph copyright 1981 by Atsushi Sakurai. (This photograph is copyrighted. To use this photograph you must obtain permission from the publisher.)
Other males attempting to spawn with the female 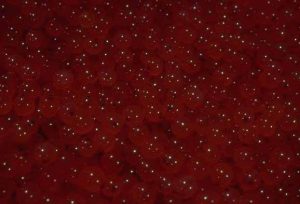 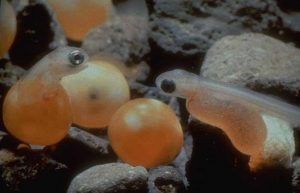 Salmon fry emerging from its egg. Photo courtesy of Salmon. 1984. Atsushi Sakurai and John N. Cole. Published by Alfred A. Knopf, New York. First edition. Photograph copyright 1981 by Atsushi Sakurai. (This photograph is copyrighted. To use this photograph you must obtain permission from the publisher.)
Alevins (yolk-sac fry) 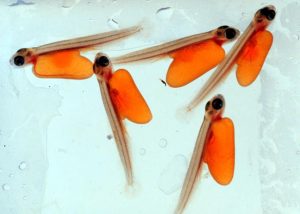 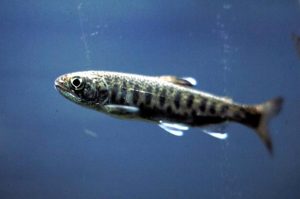 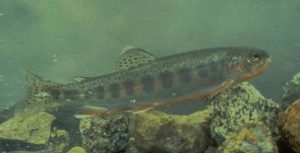 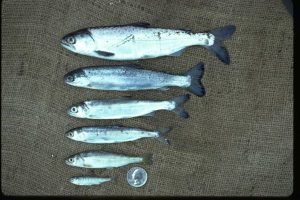 Chinook salmon smolts. Notice how the fish have become silvery in color and the parr marks have faded. Image obtained from the BPA photo archive.
Decomposing bodies 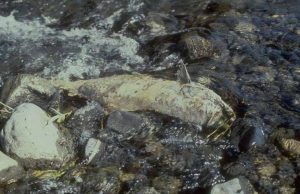 Close up of salmon kelt decomposing in stream. 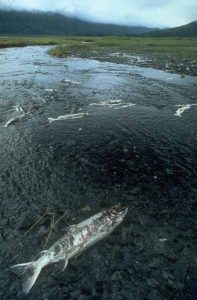 Salmon kelts decomposing in stream. Images obtained from the BPA photo archive.
Unless otherwise noted, images on this page were obtained from the Bonneville Power Administration’s photographs archive.  Images in BPA’s archive often do not credit the original source, but are believed to be in the public domain.  Please see our “Citing StreamNet Content” page for how to cite the sources for these images. We believe any and all copyrighted images on this page are used here as provided in Section 107 (the Fair Use clause) of U.S. Copyright Law.  If you wish to use a copyrighted image from this page then you must obtain permission from the copyright owner.

A FISHERIES DATA PROJECT OF